So I'm no John Evelyn, no Samuel Pepys......but now the Philippines blog makes a comeback. The only vaguely interesting news here, and that will be very questionable for many, is that the relief map of Mindanao, possibly only the second ever in the whole wide world, after the Jose Rizal-inspired one in Dapitan in the late 19th century, has had a spruce up. To see it in its former glory, have a look on Google Earth. Just type in 'Colupan', and there's a photo of it. In its glory days, the map featured coloured lights to indicate the 15 major cities. Sadly, after a few years of attempting to sustain what must have been a very dubious underwater wiring network, the map's maintenance team - me - has decided that the lighting had to go, and the wiring was covered over with quick-drying cement.
The last straw, was coming back this year to discover a scene of desolation - see above - a relief map in sad repair. None of the 15 lights worked - in fact, none of the bulbs was intact. A high level enquiry has concluded that the culprits have been narrowed down to about twelve 2-8 year old children, who sadly lacking Dinky Toys, Hornby train sets, even ghastly computer games, take their juvenile kicks from stomping all over the map, and knocking the crap out of it. (They have been rewarded with food, drink, medicine and our loving support, through gnashing teeth, in my case)
To compensate for this sad reduction in night-time visual impact, I have re-painted the map, to reflect the latest political boundaries, though proximity to the actual colours needed has been compromised by my lack of paint-mixing skills. (actually white latex, with a combination of tinting colours). The fountain still works, as does the light at the top of the flag post. (The Philippine flag is raised whenever the Queen of Colupan - Bing - is in residence, and lowered on her departure, which this year will be on 30th April 2013, just in time to avoid the excesses of the barrio fiesta and local mayoral elections)
Well, diary, that is all for now. I have to upgrade the drainage of the front balcony, and then finish off "Oliver Twist", part of a complete set of Dickens inherited from my grandparents.
Posted by Kevin at 20:18 1 comment: 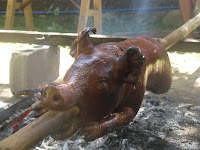 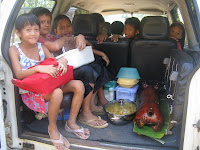 How better to celebrate the death anniversary of Analuz's grandfather Agripino - he died 20 years ago - than a beach picnic at Patapla beach in Jiminez. Got back from my 5.30am run to hear the squeals of a soon-to-be deceased pig, which was spit roasted, and loaded onto the Crosswind. Had a good swim before the food. 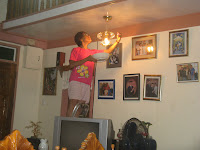 While we were there, Paul and Eddie finished off the painting.We got them to paint the walls as well, so the two downstairs bedrooms got a complete redec. It cost £250 to replace the ceilings in two rooms, under the landing and a bit of overhang outside, paint the new ones, redec the two rooms, revarnish the floors of the two upstairs bedrooms, landing and stairs, and wash all the external paintwork. It seems a lot in pesos, but what good value.
Posted by Kevin at 06:13 No comments:

Paul & Eddie are here to finish off decorating the two downstairs bedrooms. Once the ceilings had been re-painted, we got them to re-paint the walls too. (I'd removed the window screens, and cleaned them & the windows before they started). They are now painting the new marine ply ceiling over the TV, so we'll be back to normal soon
Posted by Kevin at 22:18 No comments: 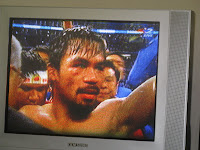 The Pacquiao v Clottey fight was on 3 of our cable channels, after all - no politician would allow brownouts when he's fighting. In fact the channel we watched was sponsored by the local congresswoman. It was a clear picture, even if the fight itself was too one-sided to be exciting. 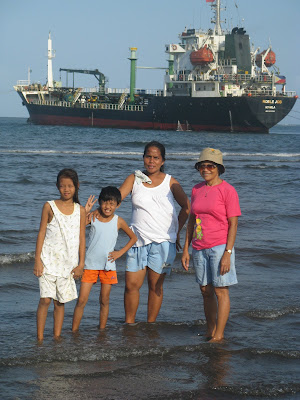 Went to to Jiminez beach in the afternoon with Doding (who is expecting her second child, due in a week's time. She has one daughter aged 16, who has just started college in Ozamiz), Annelie and Oki, and had a swim, though the tide was on the way out. A tanker was unloading at the jetty. 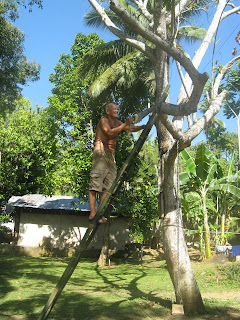 On Monday I sawed a large dead branch off the avocado tree opposite. I was able to get to it as Mario had made us yet another bamboo ladder. The building at the back is Andring's house. She is the widow of Cinto, one of Bing's cousins, who died, aged 64, just two hours before Bing was due to fly back to England in December 2004.
This bit of land is owned by Bing and Shirley, and we are developing it as a childrens' play area. On the truncated branch hangs a swing. We had a proper playground swing made a few years ago, which has proved very popular. The house is to the right of this photo.
Posted by Kevin at 21:33 No comments:

Despite hoping for a winter break with no big projects, we're having remedial work done on the house, as water and termites have damaged ceilings. Crispin is replacing the door frame onto the front patio. We're having the ceiling in Mama & Papa's old room replaced. The underlying problem is that the front terrace doesn't drain properly, so water stays on the surface and seeps through the grout, and softens the wood, which then attracts termites who munch away. We're having the terrace re-tiled, so that it slopes from front to back and right to left, with a bigger drain, covered with gauze to prevent blocking. It's barely rained since we've been here, though pours in Nov/Dec. Crispin is planing the new mahogany wood with an electric planer before the brownout  begins.

I've got to plan the Pacquiao v Clottey fight viewing, as we're due a brownout on Sunday morning when it is live here (Sat. night in Dallas). Might have to see it in Jiminez.
Posted by Kevin at 17:06 1 comment:

We were up at 5am this morning to take Jun and Bebe to Ozamiz airport. They are off to Manila. We had a great few days with them. On Wednesday we drove to Hoyohoy,  a mountain resort about 1500 feet high. From there Ozamiz looks like a postage stamp. The mountain road was, as usual, unfinished, with alternate cemented and rough bits. On the way we stopped at Citi Hardware and bought a re-chargeable light unit and rubber torch to help cope with the increasingly regular brownouts. 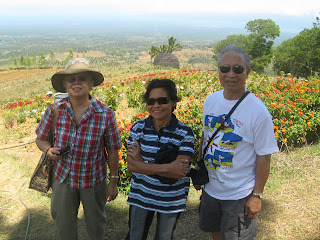 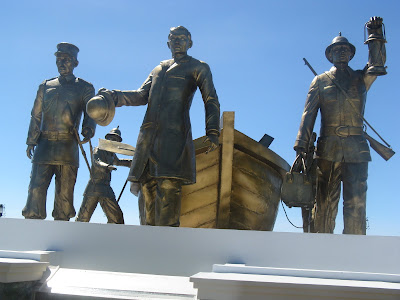 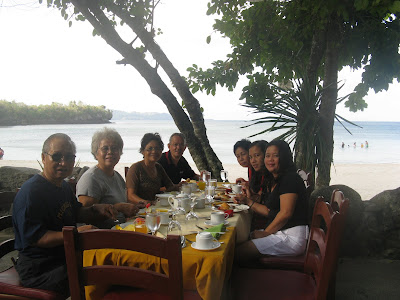 We drove to Dapitan on Thursday, with Jun, Bebe, her sister Day Day, Pia and Gemma, and had a look at the Rizal's relief map of Mindanao, which he  created in 1892. It is in front of St. James' church. The new tableau, above, depicts the moment Rizal and his armed Spanish guards landed at Dapitan. It's made of cement and painted in gilt - very impressive. After a seafood lunch with Bebe's friend Mila, we drove to Dakak, a resort situated in a small cove with white sand. In the evening we had calamares, washed down with a few San Miguels, my first proper drink for 24 days. 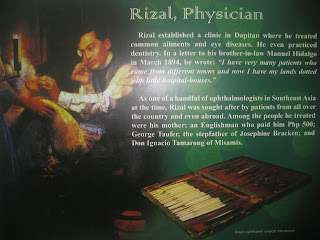 On Friday we visited the Rizal shrine, always an oasis of calm by Dapitan bay, but surrounded by huge trees and lianas and serenaded with a chorus of crickets. The museum has been upgraded with a series of panels depicting Rizal's exile. Lunch was at the Dapitan Resort Hotel, by the bay, and we stopped at Rhovic's Place on the seafront in Oroquita for a drinks break on the way home. Back to Colupan and an evening brownout.

Yesterday Jun, a retired engineer, replaced the shower tap, after we'd driven to Ozamiz for a plumber's wrench, costing P395. He even managed to remove the disc from my angle grinder, which I failed to do. Went to Colupan chapel at 4pm, as it was the first Sunday in the month. Father Peter called in for dinner and wine afterwards.
Posted by Kevin at 20:19 1 comment:

I pressure hosed the patio and raised beds in the back garden on Monday. Jun and Bebe from Florida called yesterday morning, and we later joined them for a lunch reunion of her family. Here they are in the allotment. We need to support that papaya tree or it will fall down. Roger Fuertes, an ex pro boxer, was there helping with the cooking. Paul, who painted the house two years ago, is here with a couple of lads to wash the paintwork. We went to the day care centre to show the kids Adam's video of Bing's visit last year. In the afternoon Lorie, Sarah, Meilor, Kirsten, and their son Arun and Kirsten's mother called in. So no work yesterday. At 7pm there was another brownout, the second in two days. Water levels are low at the hydro electric plants, caused, apparently, by El Nino. As it's dark at 6.30pm we use our laptops by candlelight till the batteries fail, sit on the balcony in the moonlight, and go to bed early and read by torchlight.
Posted by Kevin at 15:55 No comments: